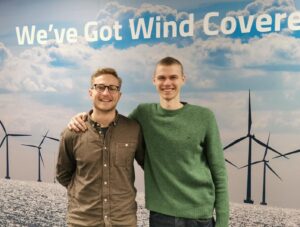 An opportunity to apply multiple skills

“We’ve been allowed to somewhat pick and choose what kind of competencies we wanted to make use of and what kind of fields we wanted to explore, and that has been really nice. We’ve been able to do some calculation, some drawing, and some finite element analysis, of course within the boundaries of the available projects,” Emil says.

During their time with ENABL, Emil has, among other things, been working on developing a tool for a customer, which entailed both design, development, and calculation efforts. Jonas, on the other hand, has for instance been involved in designing rotators and in programming a hotspot tool.

Jonas and Emil both highlight that they have been part of a very trusting working environment at the office. They have been given a lot of responsibility for their tasks, without constantly being checked on. They also enjoyed that their colleagues didn’t hesitate to take time out to help them. This gave Jonas and Emil a feeling of working within a united team.

Now that the internship is coming to an end, their supervisor, Anne-Mette Nils Ebbesen, speaks very highly of Jonas and Emil’s performance.

“Having the opportunity to work with both Emil and Jonas has been a gift, not only to me but also to many of my colleagues in Aarhus. The freshness, curiosity, and immediacy they have brought to the office have been a joy to experience. They are both very proactive and positive in their outlook on life, and they are easy to work with. Their level of knowledge and professionalism is very high. They have worked with concept development, coordination of suppliers, drawings, calculations, and more, ultimately developing tools which will benefit the company for a long time,” Anne-Mette says.

Jonas and Emil’s learning experience and outcome are not to be overlooked.

“I prefer doing the internship over going to school. The school doesn’t allow you to dive into topics in the same way as with real work. I have definitely learned more during the internship than during a semester at school. But what I also value is that most of my learning comes from people at our office. I have also realized how powerful collaboration with colleagues is. For me, that has been the bigger experience, realizing how much you can get done if you’re not afraid to reach out and work together with other people,” Emil says.

To Jonas, the trust granted by colleagues has been a motivational factor:

“The trust I was given as an intern truly motivated me. The team really believes in you and puts some responsibility on your shoulders, which is nice and motivating,” Jonas says.

Emil and Jonas are classmates at Aarhus University, and they are both going for a university exchange the next semester. But when they return to Denmark, they will be back at ENABL as student workers.

We are happy that we have had excellent interns like Jonas and Emil, and we look forward to welcoming them back.