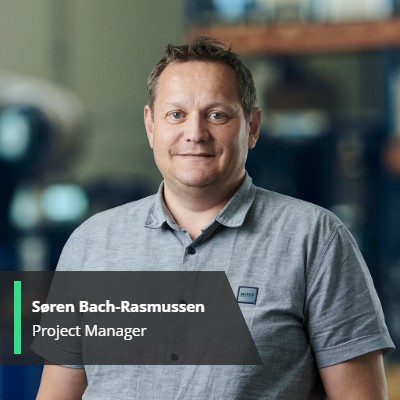 Today, Søren is employed as Project Manager at ENABL, dealing with lifting equipment for blades.

To Søren, motivating his team is an essential part of his job. It is crucial to him to make his team commit to a project and feel a sense of ownership of it. Thereby, the team manages to do excellent work.

“It is important to me to be able to motivate my team to go the extra mile,” Søren says.

When Søren joined Eltronic A/S 20 years ago, the company had only existed for a few years, and all colleagues were familiar with one another. To Søren, experiencing a relatively small company grow into a large group has been fascinating.

“I most definitely notice that things have changed. And that’s a positive thing,” Søren says.

Søren truly enjoys working at ENABL, and he appreciates the fact that he has had the chance to be involved in many different projects – small and large ones equally.

We wish Søren Bach-Rasmussen congratulations on his 20-year anniversary!

In October, Bryan and Taco from ENABL Taiwan arrived at our headquarters in Hedensted and were staying there for a short period.